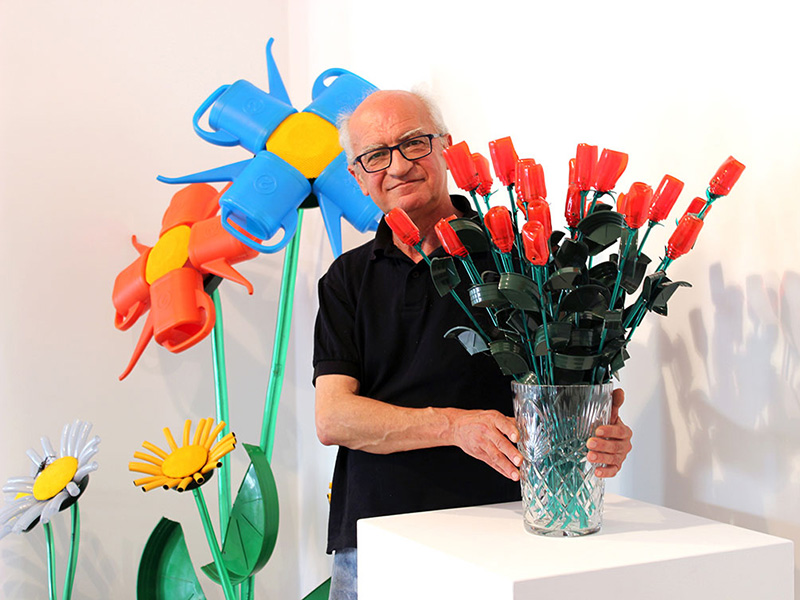 Corrado Bonomi (Novara, 1956) has a long career in solo and group exhibitions in Italy and in the main European public, institutional and private spaces. His participation in the Italian Ironic Conceptualism group formed around the Angelo Falzone Gallery in Mannheim dates back to 1995. In the same year the fundamental exhibition Quasi per gioco (“Almost for fun”) at the Neue Galerie in Graz with, among others, Vincenzo Agnetti, Stefano Arienti, Alighiero Boetti, Maurizio Cattellan, Aldo Mondino, Michelangelo Pistoletto.

Since 1997 he has been actively collaborating with the Museum A come Ambiente in Turin with which he publishes a manual-catalog Animals and Flowers arise from an educational-creative path to the alternative reuse of waste materials, as well as with the Education Department of the Museum of Contemporary Art of the Rivoli Castle. From 2003 onwards he exhibited in the collection of the VAF Foundation at the MART in Trento and Rovereto, completed his personal anthological Casa Bonomi in Milan, and exhibited several times at the Ritter Museum in Waldenbuch, at the Neuer Kunstverein in Aschaffenburg, at the Pomodoro Foundation in Milan for the exhibition on plastic trends of the 21st century, at the ZKM museum in Karlsruhe on the occasion of the collective exhibition The art of quotation.

In 2012 Gillo Dorfles chooses some of Bonomi's works for the exhibition Oggi il Kitsch (“Today kitsch”). In the following years he exhibited again at the Mannheimer Kunstverein for the collective exhibition Global warming and at the civic gallery in Trento for Nature. Art and ecology. In 2020 he participates in La rivoluzione siamo noi (“The revolution are us”), curated by Alberto Fiz, at the XNL space in Piacenza. Impressive exhibition consisting of more than 160 works from 18 collections. Opportunity to attend alongside the great names of the contemporary art system: Manzoni, Cattelan, Abramovic, Warhol, Hirst, Fontana.